Why is Sharp Ahead sponsoring MeasureCamp?

Sharp Ahead is proudly sponsoring the MeasureCamp unconference in London on 15th May 2022 https://london.measurecamp.org/.

MeasureCamp is an “unconference” – free to attend and self-organising – for the digital analytics community.

It’s an amazing event with around 300 digital analytics practitioners expected to attend, many travelling from overseas. The presentations will range from deeply technical (such as how to manage the upcoming switch from Universal Analytics to GA4), to quirky (like my own, on the relevance of WW2 photographic reconnaissance to the management of digital analytics!).

But why is a B2B digital marketing agency like Sharp Ahead sponsoring a digital analytics event?

Many of you will know me as a pioneer from the early days of digital analytics industry. And in fact the digital analytics company I founded, Site Intelligence/iJento, was a sponsor of the very first MeasureCamp, in London in September 2012. Here’s a terrible 2012-era phone photo to prove it:

So it’s a nice symmetry for me to be a sponsor again in the tenth anniversary year. And I’ve benefitted so much from MeasureCamp over the years – making new contacts and friends, honing my technical skills around digital analytics and conversion optimisation, sparking new ideas – that it is great to give something back to the MeasureCamp community.

…but it is also business

It is true that I have two decades’ experience in digital analytics, and I still work in part as an analytics practitioner, but my work these days is much more broadly-based. When I co-founded Sharp Ahead in 2014 I had a vision that analytics skills and techniques could be put to use in an agile way, in combination with a more general commercial and marketing skillset, to design and optimise digital activities for specialist B2B companies.

That vision came true, I guess! Today, Sharp Ahead actively uses digital analytics every day as one of many techniques to design and improve digital marketing campaigns. I’m one of the team’s analytics experts but several of my colleagues are pretty handy with analytics technology as well. We also work with PPC, SEO, content marketing, marketing automation and CRO, amongst others, to help our clients achieve cost-effective results. Our team also includes designers, copywriters and website builders.

Sharp Ahead looks to work with smart generalists who enjoy using a range of skills to find the best ways to grow our clients’ businesses. I’m pleased that digital analytics still plays a big part in our work, but just as excited about the other elements of expertise that we are able to blend together in our clients’ projects.

We’re growing and looking for new clients, new team members and new partnerships. And we know that the MeasureCamp event and the community around it will be a great place to find them.

Check back on our blog soon for a report from the event. And whether you are attending MeasureCamp or not: if you know of B2B companies who might benefit from our skills, if you know of smart digital marketers looking to work in a great B2B agency, or if you have other ideas how we might work together I’d love to hear from you. Or we can just chat about WW2 photographic reconnaissance!

You can find me on LinkedIn linked.com/in/jwoods or fill in our contact form.

This past weekend marked the first day of spring in the northern hemisphere, so we thought we’d give you a few quick tips for your digital spring clean. 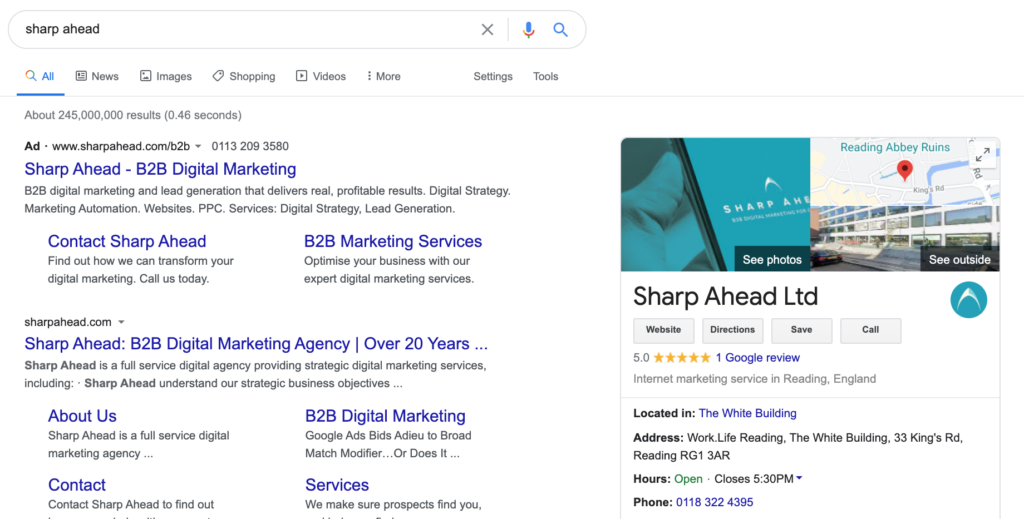 This is a key part of the experience for your prospects, customers and other important stakeholders interacting with your business and if you haven’t Googled your brand name in a while, now is as good a time as any.

Here’s how to check your SERP the right way.

First, use an incognito window so you’re not biasing what you see based on previous search behaviour. Then check for these signals:

What if things are looking a bit dusty?

This is your shop window – if it looks unloved, you’ll be losing out to other businesses. Run a brand ad. It might seem wasteful to bid on your own brand names, but for most B2B companies, those searches are relatively low volume but very high value. Plus, those ads will keep the competitors out of your P1 spot, enable you to curate and quickly update your SERP and align it with your current campaigns and brand messaging.

Pro tip: for most B2B companies, applying a few negative keywords, for example around jobs and careers, can keep costs down and focus the campaigns on your key prospects.

44% of B2B marketers say the main reason they abandon websites is that there’s no contact info immediately visible*. Unless you are selling something that can be purchased on your website, your prospects will need to speak to someone in your sales team at some point.

Make it easy for visitors to choose you with a quick look at the following:

3. Welcome new visitors (and then look after them)

You’ve done the hard work by getting someone who doesn’t know you to choose your website. Whether the onsite experience is perfect or not, you now have a chance to be remembered and convince your prospects that your business is the right choice for them.

One of the easiest ways to be remembered is with remarketing campaigns: even if you’re not using paid search or social for lead generation, you should run remarketing ads.

Consideration cycles for high end B2B products and services usually take months, or longer, and remarketing is the most efficient way to keep in touch with those decision makers during that time. Remind them of your brand, tell them something they might not know about your business and show them why you’re the right choice.

Pro tip: Don’t wait a year to refresh the creative and mix it up with different ad formats.

What next? - The BIG clean!

If you're looking to go a bit deeper, here are three things that are vital to digital marketing success in the coming year.

We discussed this in a blog article back in February but if you haven’t had time to sort out your match types, you could be wasting valuable media spend. In short, Google is combining two existing match types, phrase match and broad match modifier. This means that with nuanced search terms that are standard fare for B2B search marketers, it would be very easy to bring in a lot of irrelevant clicks and quickly reduce the ROI on your campaigns. Read our top tips for sorting this out as soon as possible!

This was another new development from Google that we flagged back in 2020 but the deadline is approaching faster than most digital marketers would like. If your site doesn’t meet Google’s criteria, or you don’t have a plan in place to make sure it will, you’ll need to think now about making a reasonable investment in speeding up your site—or risk losing valuable search rankings to better prepared competitors. If this is the first you’ve heard of CWV, read our previous blog article and then get yourself over to Google Tools for measure them!

And last on our list of big cleans, a plea to B2B marketers everywhere. Check that your customer and prospect contact channels work. Does someone answer your phone during business hours? How quickly do you respond to lead enquiries? Is your online chat staffed consistently? I know what you’re thinking, this is ridiculous of course the answer is yes. But when was the last time you checked? Do some mystery shopping and find out for yourself. In the high end B2B market, one missed phone call or a few days’ delay on replying to a form fill, could be the difference between a successful or failed campaign.

We work with intelligent marketing managers to make budgets go further and cut your cost per lead.

If you have any questions on your own digital spring clean, get in touch for a free 30-minute B2B consult. 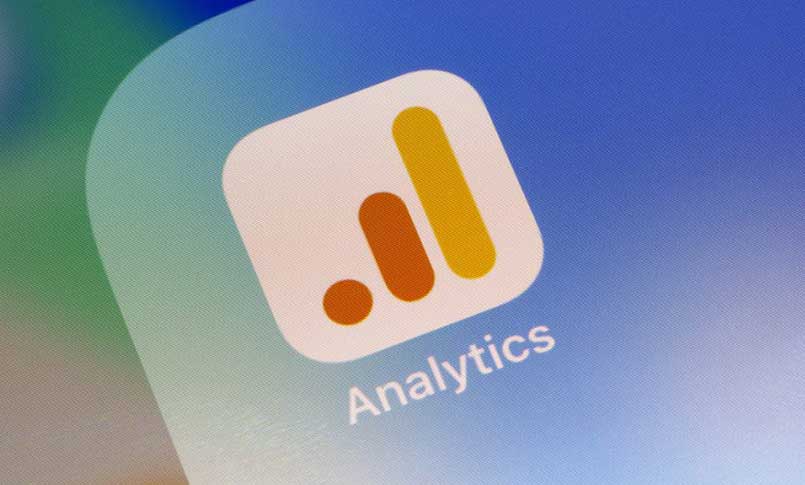 Google Analytics 4: what you need to know today

Here’s what you need to know:

The first thing you’ll notice when entering Google Analytics 4 is a sleek and modern interface. The redesign makes it easier to use and more accessible than its predecessor, Universal Analytics.

Behind the design, GA4 introduces a major expansion to the machine learning capabilities in Google’s analytics offering. While it is still too early to fully understand GA4’s potential, it’s an exciting addition.
GA4 also sees a complete re-haul of the data collection architecture.

With more apps, web apps, ecommerce stores, and complex websites circling the Google-sphere, GA4 looks to plug the hole in Google’s offering by collecting data on the complex user journeys in apps and highly interactive websites with minimal set up.

The clunky Goal Tracking in Universal Analytics has been removed to make way for simple-to-set-up Event and Conversion tracking. This allows user behaviour such as logging in or browsing products to be recognised easily.

But there is a catch.

GA4 is so fundamentally different to Universal Analytics that it requires adding a new tag to your website. And with it, a fresh start on Analytics.

Google has made finding the new tag super easy, but when you add it to your website, your GA4 dashboard will be blank. You’ll need to start afresh collecting data from the moment you set up the new tag.

We don’t currently know when Google will start decommissioning Universal Analytics, but with historical data being a pivotal factor in how useful analytics is, you’ll need to prepare.

What to do next:

In the meantime, we’ll keep an eye out for more information on GA4 and the future of Analytics. Please follow us on LinkedIn or Twitter to stay in the know!

We’ll send you our newsletter roughly twice a month. You can unsubscribe at any time.